If you don’t respect what you’re part of, how can you be part of anything?

Today from my chakra plateware, I picked a red bowl because Muladhara is on my mind. The root chakra. The metaphorical fertile soil within: our internal earth/terra. Stuff pertaining to our sense of survival and actual survival.

The killing of the albino moose in Nova Scotia, began this journey. It is not the same as taking milk from a cow or an egg from a chicken or even fishing. There we have some mutual relationship, beneficial commodity for people of all nations. There we have sustenance that support populations and that eventually return to the land, making a closed circuit.

The premise that man can take life from this Earth without recognition, participation, or even consequence is out of balance. One individual alone or with friends, roaming Earth searching for a life to take, wipe out, and delete without purpose or offering. No, this is not an agreement. This is rape.

The root chakra is where we all come from, where we all belong, our security, foundation, and our roots. Where we sprout from: our ability to create and equally as powerful and as needed- it is also the energetic vibration from where we find ourselves capable of destruction.

As you very well know, destruction does not need to mean death, no. There are hundreds of thousands of micro and normal-sized aggressions taking place in any un-examined minute across the globe: actions where people, plainly for lack of a better word, just shit on someone else. It is this – I want to dive into.

This that I want to explore and understand: with the death of yesterday’s senseless tragedy there was also one added event that fell in line with this Muladhara / Root Chakra theme. A friend, colleague, and dear teacher of mine had an experience and shared it with her loving circle and it has rippled across many ponds. In bearing witness to the frustration and anger that she felt and those that support her, I rippled into my own ideas of what it means to “discover” and “understand” something, anything, any concept that ever was.

My friend, Stephanie Adams Ruff has a theory – a concept – an understanding. She teaches Advanced Asana is Advanced Awareness and one of her facebook friends, Deborah W., has access to all of Steph’s informative and educational posts, and decided to copy her. Just took the words, the premise and teaching, the heart of it and regurgitated it as if there were baby birds depending on her. When confronted, Deborah acted harshly, used abusive language, and abandoned all respect, demonstrating that she held zero comprehension of the teaching she had just plagiarized.

Stephanie’s understanding was not traditional in the sense that she read it somewhere, learned it and passed it on as we typically think of education. No, her understanding was the antithesis of that. From her studies, teaching, and even better, learning from years of teaching, was granted the opportunity to observe the processes surrounding these interchanges.

From her experience and vantage point she saw the gaps and their consequences, and knew for the greater good, her energy was best-spent filling them. She decided to modify the “teachings” as they are often exercised because in order for her to be whole in her practice as an educator, she must bring wholeness to others. This is her understanding and application, and it’s beautiful.

Back to thinking critically about an “understanding.” It is an entry point, an oasis, something to bite at, consume, and digest. Today I came across three items on the beach. AKA Gurus.

The first – A Gull. My salvation for the moose.

I was able to sit with a sick/injured sea gull until it was picked up by wildlife protection. “It’s just a sea-gull,” you say. Well, it’s her or his home too – and she is a huge reason why I love living near the Sea. We share it together.

The second was a pacifier. I thought about the expression, “Suck on that,” and was instantly reminded of the destructive mentality and careless attitude that shows no grace for other humans. But also, the name of the object: Pacifier. 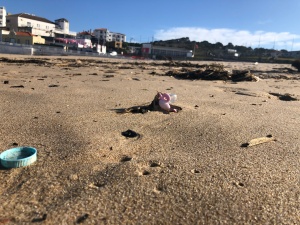 The idea that there are individuals who have no want for understanding, they just want to suck and chew, to keep busy, to reiterate, regurgitate, and copy and paste. These Deborah’s are unconscious and have no idea.

And appropriately, the third was a mass of mussels. It was two times the size of a softball, and every inch of the center – the heart of the matter – was hidden. All that was left was a ball of identities tied together, each one unrecognizable from the other, the entirety of it covered in shells like a sea-themed rubik’s cube.

Everything is a collection of every other thing that everyone who came before you, was already doing.

You are part of a long history.

You were here before you even arrived, but you do not gain access without reverence, and you do not exist without cooperation.

In Portugal, we have another bivalve called percepçao.

While, they are less prominent than Mussels, they are equally as beautifully and live in that same vein.

They’re so rare, the only photo I could insert is one I took myself. Isn’t that telling?

I dare someone to find one on Google, if you do please comment with it.

To get back to Muladhara, to the Earth: to survival: internal and external. How does a tree thank the seed that started its life, it sends out more seeds in the same exact likeness that began everything. If you don’t respect what you’re part of, how can you be part of anything?